This blog post is base on our comment published in Science of the Total Environment (Pourret et al., 2020).

The definitions of ‘predatory’, ‘deceptive’, or ‘questionable’ publishers/journals are often vague, opaque, and confusing, and can also include fully legitimate journals, such as those indexed by PubMed Central. In this sense, Grudniewicz et al. (2019) recently proposed a definition that needs to be shared:

“Predatory journals and publishers are entities that prioritize self-interest at the expense of scholarship and are characterized by false or misleading information, deviation from best editorial and publication practices, a lack of transparency, and/or the use of aggressive and indiscriminate solicitation practices.” 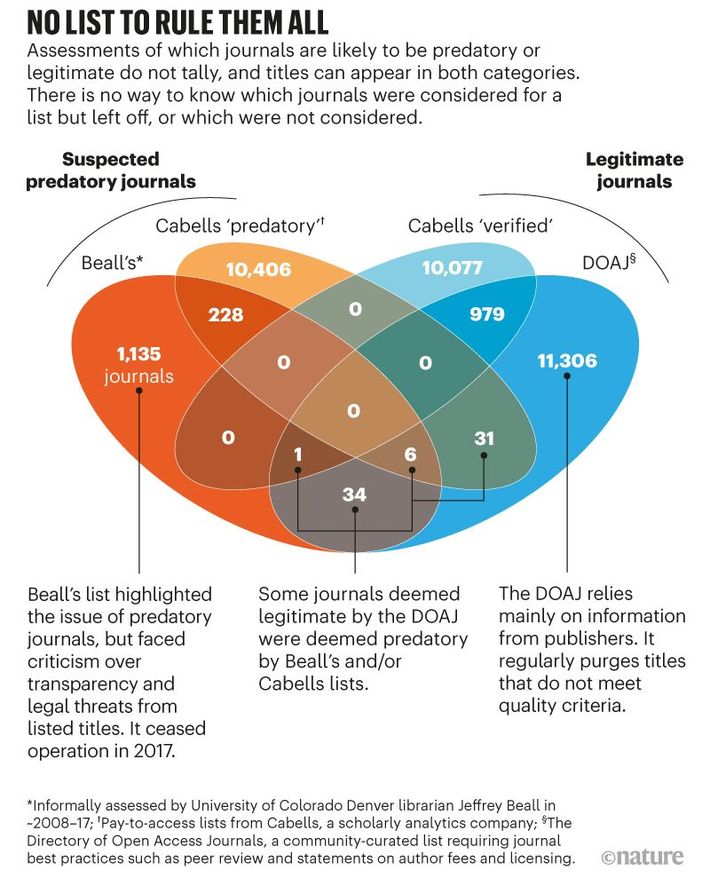 Moreover, Eve and Priego (2017) queried who is actually harmed by “predatory publishers”, and concluded that any harm is negligible to virtually all stakeholder groups, including researchers. However, they also noted that “established publishers have a strong motivation to hype claims of predation as damaging to the scholarly and scientific endeavour while noting that, in fact, systems of peer review are themselves already acknowledged as deeply flawed”. As researchers, it is our duty to remain critical and not fall for such misleading messaging, and focus on the real problems at hand.

Publishers have always been in the lucrative business of making money off of researchers, and the largest publishing houses are among the most profitable companies in the world, often at the expense of vast amounts of taxpayer funds. Predatory publishers are no worse in this regard than any other commercial publishing house, except that the scale of their threat is relatively minute. However, the problem of predatory publishers can be easily alleviated with a little knowledge and training. One simple rule for researchers is that if you do not recognise a journal, invoke some scholarly intellect and act sensibly and do not publish with them. There now exist a number of alternatives to the defamed “Beall’s List”, including Cabell’s Whitelist and Blacklist (commercial), as well as the DOAJ. Web of Science and Scopus also offer whitelists of a sort, and a tool dedicated to this specific problem, Think Check Submit, is freely available.

These tools and services will not stop the ‘pollution’ of the scholarly record. With or without OA journals and OAPJs, there has always been harmful research published in journals. One of the most harmful papers ever published, associating vaccines with autism, was published in the ‘top’ journal, Science, retracted finally 12 years after publication. and continues to create major global health problems to this day. There is absolutely no evidence to support the assertion that OAPJs lead to a decline in the public trust in science; and indeed, with more open research practices, public trust in science is actually on the rise. In terms of the ‘fight’ against questionable publishing, many organisations, groups, and individuals have already in part taken on this burden (e.g., COPE, DOAJ). At an institutional level in Denmark, France and many other countries, it is now commonly a requirement for students at different levels to pass a responsible research course of some sort, including ethical research conduct, plagiarism, and identification of predatory journals. We do not believe that judges are required to fix this problem, but that training, support, and education can help. If we want to almost completely solve the problem at its source, the solution is easy: require all journals to publish their review reports alongside articles, and thus prove that they operate a rigorous peer review procedure.

In the International Open Access Week which is celebrated from 19 to 25 October with the theme, “Open with Purpose: Taking Action to Build Structural Equity and Inclusion,” the School Libraries Network (SLN) reinforces its commitment to build libraries that are “inclusive organizations, ensuring equal access to information services and resources” – SLN. (2014). Strategic Framework 2014-2020, p. 10.

Open access practices and policies enable the reading, distribution and recreation of knowledge and culture without borders, making them a value that is a public right and heritage and on the basis of which people find opportunities and develop skills to improve their lives.

How do school libraries facilitate and stimulate open access in their daily lives?

– Creating and making available open and inclusive repositories that allow the consultation and collaborative creation, in different languages, media and formats. They integrate works fallen into the public domain or with open Creative Commons licenses (e.g. CC BY 4.0), for example: SLN Digital School Library – Ebooks.

– Using software (for example: Libre Office has Writer and Calc equivalent to Word and Excel, respectively) and open source digital tools such as those gathered in SLN Digital School Library – Instruments.

– Training and stimulating the participation of children and young people, teachers, parents, municipality, local library and other community agents to fulfil the library’s mission.The promotion of literacies is based on unique educational resources, centered on users’ autonomy and created by the library based on the curriculum – for example: SLN Digital School Library – Information and Media Tutorials. It works on issues that contribute to resilience and well-being, for example: copyright, data protection, online ethics.

– Proposing and spreading to the whole school guidelines/ policies and good practices that, based on the IFLA Statement on Open Access, deepen and disseminate the right for information, knowledge and culture that supports a free and good life.

“There’s no point in publishing anything, if no one will read it in the end.”

This year’s Open Access Week consists of webinars, blog articles and video testimonials on Open Science. The event is put together by the faculties of Law and Pharmaceutical, Biomedical and Veterinary Sciences together with the Library and the Department of Research Affairs & Innovation.

Open Access at the University of Antwerp: a library point of view by Rudi Baccarne – view

Preprints are manuscripts made publicly available before they have been submitted for formal peer review and publication. They might contain new research findings or data. Preprints can be a draft or final version of an author’s research but must not have been accepted for publication at the time of submission.

Researchers, journals, and universities want to receive more citations for their scholarly publications. However, a paper citations depend on its quality, visibility and author’s online profile. Research support documents (unpublished papers, white papers, project reports, datasets, software, posters, online resources and teaching materials) can be additional source for increasing the author’s visibility. To enhance research visibility and impact, the full range of scholarly output should be available online on the open access platform. With open access platform, key research findings are made accessible immediately to the scientific community. Therefore, the publicly available research support documents may result in receiving more citations in addition to the published papers. In this short communication we will elaborate more on improving your research visibility and impact through publishing research support document.

This study diachronically investigates the trend of the “open access” in the Web of Science (WoS) category of “communication.” To evaluate the trend, data were collected from 184 categories of WoS from 1980 to 2017. A total of 87,997,893 documents were obtained, of which 95,304 (0.10%) were in the category of “communication.” In average, 4.24% of the documents in all 184 categories were open access. While in communication, it was 3.29%, which ranked communication 116 out of 184. An Open Access Index (OAI) was developed to predict the trend of open access in communication. Based on the OAI, communication needs 77 years to fully reach open access, which undeniably can be considered as “crisis in scientific publishing” in this field. Given this stunning information, it is the time for a global call for “open access” by communication scholars across the world. Future research should investigate whether the current business models of publications in communication scholarships are encouraging open access or pose unnecessary restrictions on knowledge development.

The high competitive environment has forced higher education authorities to set their strategies to improve university ranking. Citations of published papers are among the most widely used inputs to measure national and global university ranking (which accounts for 20% of QS, 30% of THE, and etc.). Therefore, from one hand, improving the citation impact of a search is one of the university manager’s strategies. On the other hand, the researchers are also looking for some helpful techniques to increase their citation record. This chapter by reviewing the relevant articles covers 48 different strategies for maximizing research impact and visibility. The results show that some features of article can help predict the number of article views and citation counts. The findings presented in this chapter could be used by university authorities, authors, reviewers, and editors to maximize the impact of articles in the scientific community.

Do you know “Over 43% of ISI papers have never ever received any citations?” (nature.com/top100, 2014). Publishing a high quality paper in scientific journals is only halfway towards receiving citation in the future. The rest of the journey is dependent on disseminating the publications via proper utilization of the “Research Tools”. Proper tools allow the researchers to increase the research impact and citations for their publications.

Prof. Wiley from the USA is the Chief Academic Officer of Lumen Learning, a company dedicated to increasing student success, reinvigorating pedagogy, and improving the affordability of education using a combination of open educational resources, learning analytics, continuous improvement, and professional development. He is also currently a Simon Fellow at Carnegie Mellon University, the Education Fellow at Creative Commons, an Ashoka Fellow, and adjunct faculty in Brigham Young University’s graduate program in Instructional Psychology and Technology, where he is part of the Open Education Group.
https://davidwiley.org/