Today (March 31) is data capture day, however in exception to my usual practice, release will be delayed until next week. This step is meant to help me, and everyone else, fully participate in Earth Hour.

Open access issues are clearly on the minds of U.S. lawmakers. Yesterday, the U.S. House of Representatives Subcommittee on Investigations and Oversight conducted a hearing on the topic “Examining Public Access and Scholarly Publication Interests.” The hearing was designed to generate information regarding open access in general, but quickly turned into a discussion of the recently-reintroduced Federal Research Public Access Act (FRPAA).

Open access issues are clearly on the minds of U.S. lawmakers. Yesterday, the U.S. House of Representatives Subcommittee on Investigations and Oversight conducted a hearing on the topic “Examining Public Access and Scholarly Publication Interests.” The hearing was designed to generate information regarding open access in general, but quickly turned into a discussion of the recently-reintroduced Federal Research Public Access Act (FRPAA).

Cancer Medicine has now published the inaugural editorial by Dr Qingyi Wei, Personalized medicine at a prime time for cancer medicine – Introducing Cancer Medicine. Dr Wei writes,  ”We are entering an important era when cancer medicine is being transformed into personalized medicine.  At this time, I am delighted to introduce Cancer Medicine, a new Wiley Open Access interdisciplinary journal, which is committed to rapidly disseminating cutting-edge research and will consider submissions from all oncologic specialties, including, but not limited to, the areas of cancer biology, clinical cancer research and cancer prevention to advance the personalized care of cancer patients.” We hope you enjoy reading the editorial and learning more about this exciting new journal.

Cancer Medicine is open for submissions. To submit your article please visit our online submission site.

So what difference does it make what you call it?

The answer is subtle, but important:

The goal of providing “public access to publicly funded research” has a great deal of appeal (rightly) to both tax-paying voters and to politicians.

So promoting open access as “public access” is a very powerful and effective way to motivate and promote the adoption of open access self-archiving mandates by public research funders such as NIH and the many other federal funders in the US that would be covered by the Federal Research Public Access Act (FRPAA).

All research worldwide, however, whether funded or unfunded, originates from institutions: The universal providers of research are the world’s universities and research institutes.

To motivate institutions to adopt open access self-archiving mandates for all of their research output requires giving them and their researchers a credible, valid reason for doing so.

And for institutions and their researchers, “public access to publicly funded research” is not a credible, valid reason for providing open access to their research output:

Institutions and their researchers know full well that apart from a few scientific and scholarly research areas (notably, health-related research), most of their research output is of no interest to the public (and often inaccessible technically, even if accessible electronically).

And that credible and valid reason is so as to provided access for all of the intended users of their research — researchers themselves — rather than just those who are at an institution that can afford to subscribe to the journal in which it was published.

It has become obvious that the >75% of researchers who have not been providing open access to their research for over two decades now — despite the fact that the Web has made it both possible and easy for them to do so — will not do so until and unless it is mandated. That’s why mandates matter.

The rationale for the mandate, however, has to be credible and valid for all research and all researchers. “Public access to publicly funded research” is not.

And it has the added virtue of not only maximizing research usage, applications and progress — to the benefit of the public — but public access to publicly funded research also comes with the territory, as an added benefit.

So Mike Rossner (interviewed by Richard Poynder) is quite right that the two are functionally equivalent.

It is just that they are not strategically equivalent — if the objective is to convince institutions and their researchers that it is in their interest to mandate and provide open access.

The latest articles from Breast Cancer Research, published between 13-Mar-2012 and 27-Mar-2012For research articles that have only just been published you will see a ‘provisional PDF’ corresponding to the accepted manuscript. Fully formatted PDF and full-text (HTML) versions will be made available soon.ReviewCurrent approaches to the management of Her2-negative metastatic breast cancerGogineni K,

The latest articles from BMC Infectious Diseases, published between 26-Feb-2012 and 27-Mar-2012For articles which have only just been published, you will see a ‘provisional PDF’ corresponding to the accepted manuscript.A fully formatted PDF and full text (HTML) version will be made available soon.Study protocolMulticentre RCT and economic evaluation of a psychological intervention together with a

The latest articles from BMC Medical Research Methodology, published between 26-Feb-2012 and 27-Mar-2012For articles which have only just been published, you will see a ‘provisional PDF’ corresponding to the accepted manuscript.A fully formatted PDF and full text (HTML) version will be made available soon.DebateAgainst Quantiles: categorization of continuous variables in epidemiologic research,

When I click on the most recent article in Cell Reports, the following picture is what I see – on the left hand side, it says


[copyright sign] The Authors 2012. On the right hand side, there is a “Permissions” link which goes to Rightslink. The only other copyright related note I see on this page (not in the picture below) is the [copyright sign] Elsevier 2012. All rights reserved. In the actual article, at the very bottom of the article under “licensing information” is the Creative Commons license. The author copyright notice is also there – at the bottom of the page, not co-located with licensing information.  A google search for a paragraph within the actual text immediately directs me to this article, which suggests that this Elsevier version of a no-derivatives article is available for text mining. (Details below). 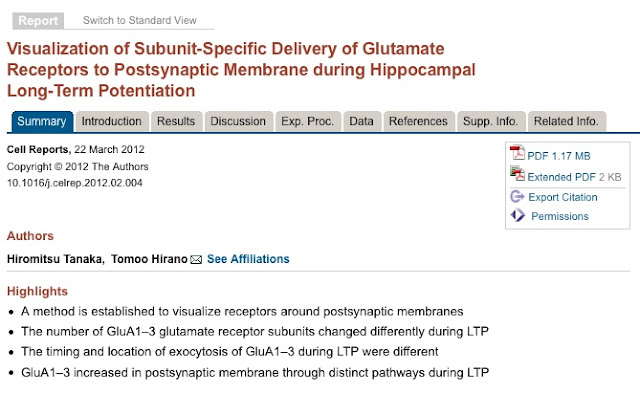 Here is the paragraph within the text that a google search immediately connected with the actual article:

Next, we expressed an AMPAR subunit (GluA1, GluA2, or
GluA3) fused to Super Ecliptic pHluorin (SEP), a pH-sensitive
variant of EGFP, in hippocampal neurons cultured on the NRXcoated
glass in order to observe changes of the subunits during
LTP. SEP fluorescence is quenched by low pH inside cytoplasmic
vesicles such as endosomes

Elsevier’s Cell Reports has announced that they are offering authors two options for real open access in the form of two Creative Common license options, CC-BY (attribution only) or CC-BY-NC-ND (attribution- non commercial-no derivatives). In both cases, it is the authors that retain copyright, according to the announcement. This is important, as it signifies that with this journal at least, Elsevier is recognizing their obligation to give up commercial sale rights when paid for article production services. However, when I lookat articles in Cell Reports, I see copyright (c sign) Authors, and a permissions link – which goes to Rightslink, not Creative Commons.Is Elsevier confused, or is this more pseudo-OA like Elsevier’s sponsored articles?