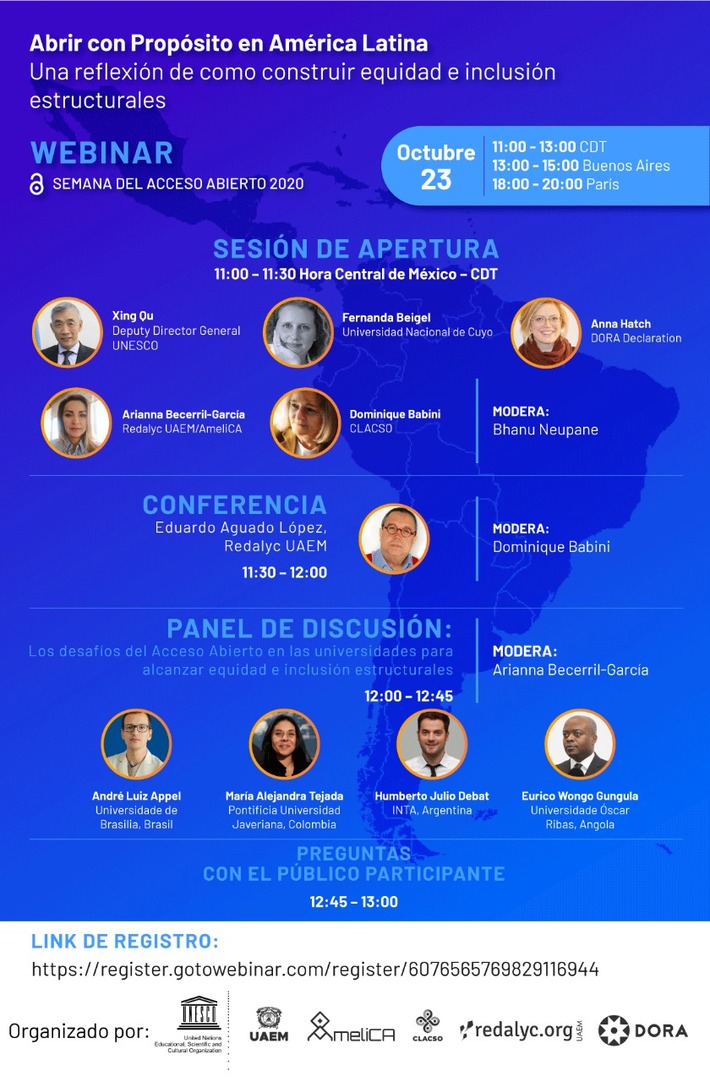 “In Europe and USA scholarly communications have been outsourced and one of the most profitable businesses was built by main international commercial scholarly publishers, which today offer to take care of open access, building a new enclosure to knowledge for the Global South, and distracting governments, funding agencies and the scholarly community, in the North and in the South, from the need to build a global open access ecosystem based on shared and interoperable institutional, national and international non-commercial open access repositories and publishing platforms. If we want voices from the Global South to have more participation and impact in global conversations about issues that concern us all, the global scholarly community has to take good care of open access scholarly communications, including the peer-review, quality control and evaluation indicators systems”

In Latin America and the Caribbean, research is mainly publicly funded. However, access to the results of that research is hampered by limitations in traditional scholarly communication systems.

CLACSO-Latin American Council of Social Sciences, a non-governmental network of 542 research institutions and 650 postgraduate programs in 41 countries, partners with universities and governments of Latin America and the Caribbean in the promotion and development of strategies and initiatives that provide open access to research results in the region.

CLACSO works together with the regional initiatives Latindex, Redalyc, SciELO, La Referencia,UNESCO-GOAP, and with institutional repositories and university journal portals, to give visibility to research output from the region. All these initiatives are non-commercial and managed by the scholarly community.

The Council renews its support to those non-commercial institutional and regional scholarly initiatives mentioned above to give visibility and open access to research output from Latin America and the Caribbean, and hopes that governments in the region will continue giving their full support to strengthen these initiatives.

CLACSO promotes a model of open access to knowledge as a commons, managed in cooperative and inclusive models by the scholarly community, and supports this position in the international debate on a renewal of scholarly communications.  See CLACSO´s Declaration on Open Access to Knowledge managed as a Commons by the Scholarly Community.  And CLACSO´s activities in support of Open Access are described here.

In a region where open access initiatives mentioned above are managed by the scholarly community, the Council sees with great concern proposals from international commercial publishers to manage open access of Latin American journals.

In 2013 INASP is encouraging our partner and network countries to use Open Access Week to showcase the activities that universities and research institutions within developing and emerging countries are planning and doing. Your activities might include:

The above may be undertaken through library or faculty displays, training sessions, or producing materials/resources to share information about your activities — or other innovative ways you have found to reach research, faculty and library colleagues (such as social networking sites).

We are aware that finding budget to produce materials to promote Open Access and your own activities can be difficult, so INASP is hosting a competition that will provide winners with $500 to contribute towards these costs. There are 10 prizes to be won and the winners will also have the opportunity to share their Open Access activities with the INASP network through our websites and publications. All applicants may also usewww.openaccessweek.org to share ideas and get feedback.

Eligibility: You must represent an institution or organisation from one of INASP’s partner or network countries to enter.  See our country pages for more information.

>Because you are interested in Open Science & Open Access, and need to know how it affects your publishing (at UMCG). To get to the fulltext easy, use this guide to find the tool that suits you most How To Get the PDF!